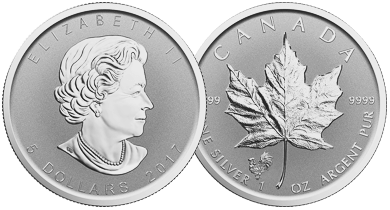 As the world’s first 99.99% pure silver coin, the 1 oz Silver Maple Leaf coin contains one troy ounce of pure silver. Its silver content and authenticity are guaranteed by the Canadian government.

As investor demand for physical silver has increased hugely since 2008, production of the Silver Maple Leaf has risen in accordance. The coin is now one of the best known one ounce silver coins in the world.

What Are The Benefits of Owning Silver Maple Monster Box 500 oz?

How Much Silver is in a Silver Maple Leaf Coin?

The Silver Maple Leaf weighs 31.10 grams and has a purity of 99.99% silver. The Royal Canadian Mint was the first mint to attain this 0.9999 purity on its standard bullion silver coins and only The Perth Mint also mints “four 9” silver coins, the highest silver purity of any 1 oz silver coin on the market.

The obverse of the coin shows a portrait of Queen Elizabeth II, who, in addition to being The British Monarch, has also been the Canadian Monarch since 1952. The Monarch’s name is displayed in a circular arc above the effigy of ‘ELIZABETH II’, with the face value ‘5 DOLLARS’ and the year, for example, ‘2014’ written below. The coin is legal tender in Canada with a nominal face value of $5.

The Silver Maple Leaf has a diameter of 38.00mm, a thickness of 2.87mm, and has reeded coin edges.

Should You Invest in Silver Maple Leaf Coins?

1 oz Silver Maple Leafs have a much lower cost of ownership than 1 oz Gold Maple Leafs, and so are a more cost effective way of building up a precious metals bullion coin holding.

Since, The Silver Canadian Maple Leaf is a 1 oz silver coin of 99.99% purity, it’s easy for investors to price using the international dollar quoted silver price (excluding the coin’s premium).The Silver Maple Leaf is portable and easy to transport, and its 1oz divisibility allows a partial holding, for example, a tube of 25 coins, to be traded if the need arises.

New Silver Maple Leaf bullion coins issued by The Royal Canadian Mint are distributed in uncirculated condition and can be securely stored in their original tube and box packaging in which they are issued.

According to the Silver Institute, the majority of Silver Maple Leaf coins have been exported to the U.S. and Europe, with Germany being a major market. Demand from Asia is believed to have grown substantially in the last few years.

What is the History of the Canadian Silver Maple Leaf Coins?

In July 1988, the Canadian Government announced that The Royal Canadian Mint would begin production of a Silver Maple Leaf Coin. Production commenced in September of that year, and the coin was launched on 17th November 1988 across six Canadian cities. Demand was so high that in the six weeks up to the end of 1988, the Mint had recorded sales of over 1 million troy ounces of silver.

GoldCore offers Silver Maples and all leading silver bullion coins and delivers to The United States and Canada.

Note: Minimum order for delivery of Silver Maple Coins is 25 troy ounces or one tube of 25 1 oz coins.

GoldCore offers the U.S. and Canadian clients fully insured secure storage facilities in the safest vaults in the safest jurisdictions in the world – in Delaware, Zurich, London, Hong Kong, and Singapore.